Also check out my Curriculum Vitae and my Portfolio. 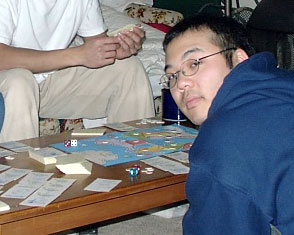 I'm currently in the Educational Technology graduate program in the College of Education at the University of Washington. My focus is on computer games for education and is heavily influenced by New Literacy Studies and Social Dilemmas or questions of morality, but I'm also interested in the accurate portrayal of science concepts in games, measures of engagement in games, and how games can be used for learning specific content areas.

I make a distinction here between educational software and games for learning. I am not and do not want to study educational software, as in games made for education. Instead, I am looking at how consumer commerical games can be used in education. There's a fundamental difference in that one is created for education and the other for entertainment, and kids as well as adults can tell the difference very easily. Yet, there is a tremendous amount of room for interpretation and critical thinking involved with traditional computer and video games, and, in fact, they offer a lot of opportunities for all kinds of learning. For a very good book on the subject, check out Jim Gee's What Video Games Have to Teach Us About Learning and Literacy.

I wrote a paper comparing the Histories of Computer Games and (game-like) Educational Software. I ended by making the argument that educational software will never be able to compete with commercial games for people's attention and that educators should instead focus on getting game developers to consciously think about how people learn while designing a game.

A year-long project in a Design-Based Research (aka Design Experiments) class with another student, Shay Johnson, was to create a game which simulated a foreign language environment to give students a place to practice outside of the classroom. We decided to create a Spanish-speaking module for Neverwinter Nights. One of the requirements we came up with was that students must be motivated to play the game outside of the classroom time. To get at this issue, we looked at Csikszentmihalyi's theory of Flow which basically is the state of total engagement, immersion, involvement, or presence, depending on how you want to define each of those terms. We used a modified version of Witmer and Singer's Presence Questionnaire to measure players' presence in the game. [Update: Here's our final paper: Measuring Flow in a computer game simulating a foreign language environment

Finally, for a seminar class I wrote a quick summary of Virtual Worlds Spill-Over, the phenomenon where our virtual lives affect our real-world lives.

I was introduced to the concept of Multiliteracies which is a relatively new discipline that, among other things, focuses on the role of identity as formed by creating texts in various media for various domains or social communities. Don't think of being literate as being able to read and write. That's the old notion, and if you look at only that definition then you are forced to think lots of kids are illiterate. Looked at in the new notion, the same kids could be very much into comic books or surfing the web, etc. They could be creating comic books and websites which requires them to really understand the texts they are working with. In other words, they are actually very literate, but as everyone else, only in certain domains.

At the same time, I started reading about social dilemmas which is the idea where the personal rational choice, as in the choice that is of the most benefit for self-interest, is contrary to the choice which would help a whole group of people, and in fact if a critical mass of people made the non-selfish choice, each individual in the group would benefit more than if they had made the selfish choice.

The result of these ideas? A paper called Addressing Social Dilemmas through Role-Playing Identities in Computer Games and an idea for all my future course work.

Two other students, Erin Riesland and Amanda O'Connor, and I designed a module for Neverwinter Nights (again) which featured decision points modeled after The Tragedy of the Commons, a classic social dilemma. We wanted to see how people see themselves as they play an RPG and if they could learn that certain identity strategies which emphasize cooperation actually worked out well. We then wanted to see if they could apply this new knowledge to real-life situations. Our final paper: The Tragedy of the Commons: Using Computer Games to Analyze Behavior in Social Dilemmas.

During the summer, I played quite a bit and completed a lot of other side-projects.

I've been refining my ideas on how to use computer games to help people understand the roles they play within a community and to instill a sense of social responsibility through games. I will post a paper in a few weeks describing my efforts to create a sustainable cooperative guild in World of Warcraft.

In addition to these more personal game projects, I'm involved in two games groups at UW. One of them is the Digital Games Research Group in Technical Communication in the College of Engineering. One of the projects the group is working on is creating a model for engagement and then validating the model through testing several games. The concept model we came up with for engagement is influenced by engagement, presence, immersion, and motivational theories from many different disciplines. Interestingly, this is the group which came up with the modified version of Witmer and Singer's Presence Questionnaire that my Design-based Research project used. We've modified it so that it speaks directly to computer gaming rather than virtual environments.

The other games group is a reading group in the College of Education which I initiated mostly because I was disappointed with how little literature discussion we do in the TC group. Our main task is to discuss a different paper on gaming every week and to create and maintain a bibliographic database which we hope will grow into one of the better web resources on gaming in academia. We're looking at texts from many disciplines, but so far the main books are What Video Games Have to Teach Us About Learning and Literacy, Wolf and Perron's The Video Game Theory Reader, and Myers' The Nature of Computer Games: Play as Semioses.